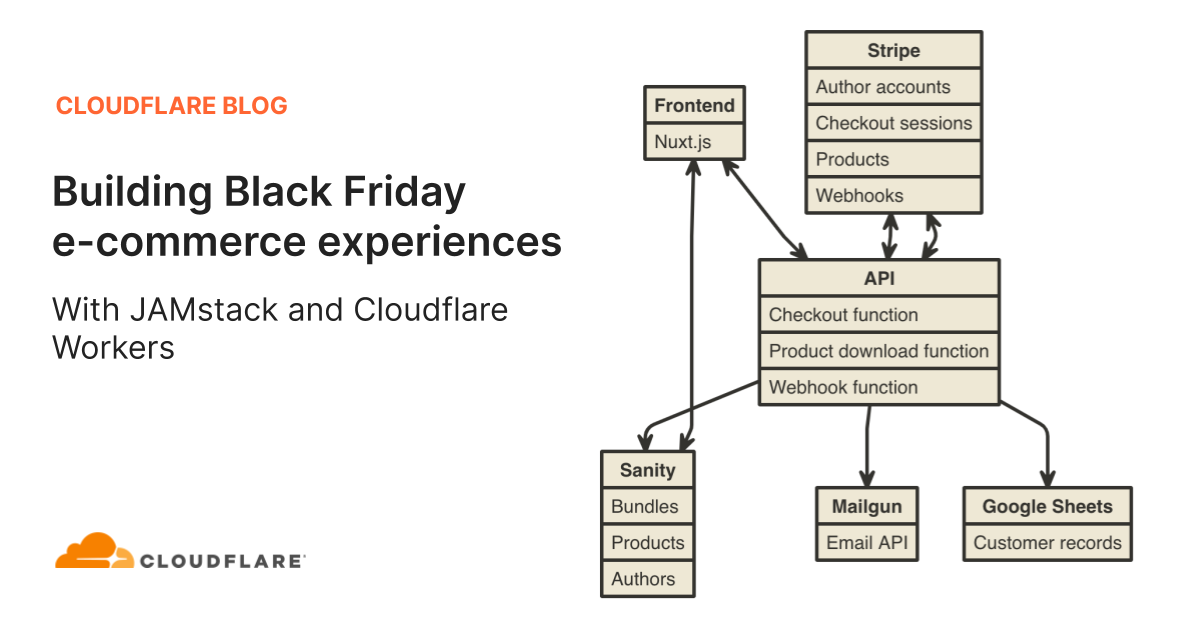 In this blog post, Building Black Friday e-commerce experiences with JAMstack and Cloudflare Workers. We'll explore how Cloudflare Workers continues to excel as a JAMstack deployment platform, and how it can be used to power e-commerce experiences, integrating with familiar tools like Stripe, as well as new technologies like Nuxt.js, and Sanity.io.

The idea of serverless is to allow developers to focus on writing code rather than operations — the hardest of which is scaling applications. A predictably great deal of traffic that flows through Cloudflare's network every year is Black Friday. As John wrote at the end of last year,  Black Friday is the Internet's biggest online shopping day. In a past  case study, we talked about how Cordial, a marketing automation platform, used Cloudflare Workers to reduce their API server latency and handle the busiest shopping day of the year without breaking a sweat.

The ability to handle immense scale is well-trodden territory for us on the Cloudflare blog, but scale is not always the first thing developers think about when building an application — developer experience is likely to come first. And developer experience is something Workers does just as well; through Wrangler and APIs like Workers KV, Workers is an awesome place to hack on new projects.

Over the past few weeks, I've been working on a sample  open-source e-commerce app for selling software, educational products, and bundles. Inspired by Humble Bundle, it's built entirely on Workers, and it integrates powerfully with all kinds of first-class modern tooling:  Stripe, an API for accepting payments (both from customers and to authors, as we’ll see later), and  Sanity.io, a headless CMS for data management.

This kind of project is perfectly suited for Workers. We can lean into Workers as a static site hosting platform (via  Workers Sites), API server, and webhook consumer, all within a single codebase, and deployed instantly around the world on Cloudflare's network.

If you want to see a deployed version of this template, check out  ecommerce-example.signalnerve.workers.dev.

The frontend of the e-commerce Workers template.

In this blog post, I'll dive deeper into the implementation details of the site, covering how Workers  continues to excel as a JAMstack deployment platform. I’ll also cover some new territory in integrating Workers with Stripe. The project is  open-source on GitHub, and I'm actively working on improving the documentation, so that you can take the codebase and build on it for your own e-commerce sites and use cases.

What are Cloud Functions, Cloudflare Workers and Serverless?

Serverless & Cloudflare workers have been cropping up a lot recently. I try to organise my thoughts into what they are and how you can use t