Why every Vue developer should be excited by Quasar 1.0 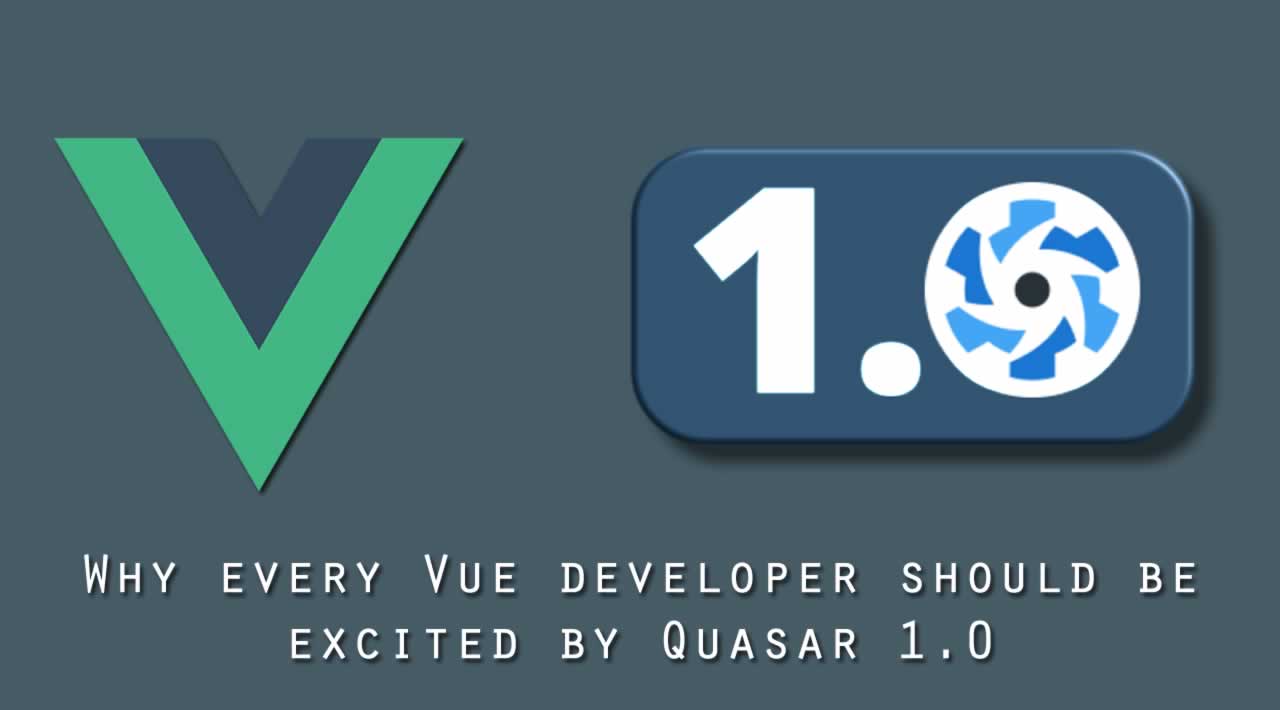 Quasar 1.0: A full-featured and extensible open-source framework founded on top of the highly popular VueJS that leverages the power of Node, Webpack and Babel.

However, before I get into the details, let me back up a little and tell you my story.

A few years ago, I was where many of you are right now — working in a big corporate world — being tired of petty internal politics and infighting …

I became increasingly troubled by the splurge of conflicting corporate tools … battling interoperability inconsistencies … and longed for a simpler life, where I could flex my programming skills and complete meaningful and rewarding projects that somehow made a difference in the world.

Back in 2015, I was using constantly new and different software tools to create all the separate types of projects that have become necessary in our modern world … iOS apps, Android apps, web apps, websites, Windows Desktop apps, Apple Desktop apps, PWAs …

Each separate flavor of app required a specific and unique group of tools for designing, developing and building, but I still dreamed of a single tool that would replace them all …

I longed for a single framework that would remove all the complexity and produce all these different flavours of apps … from a SINGLE codebase.

Unable to locate such a mythical tool, I decided to build it.

It was a mammoth undertaking. Starting from scratch I knew that I needed to base it on a powerful core framework that could be easily be extended and enhanced to produce the comprehensive system I was envisaging …

Around this time, VueJS was coming to prominence. After reviewing its structure, development path and extensibility, I decided it would provide the perfect basis for the new framework I planned to construct … and save vast amounts of time during the development cycle.

This was the exact moment that the Quasar Framework was born.

What’s Quasar all about?

These components are all based on top of VueJS… making their use completely familiar to all the many Vue developers looking for an easy and extensible component system to expand their projects.

As of today’s release of the all-new Version 1, Quasar includes 123 components … and that number is constantly increasing due to an inbuilt system for custom component creation …

After installing one global dependency and creating a project, literally one line of code is all that’s required to build a production ready iOS app, Android app, Web app, Windows Desktop app, MacOS Desktop app or Linux Desktop app … from your one single codebase …

Forget the complexities of Webpack and Babel … tree-shaking … and other bundle optimisation techniques … that’s all wrapped up, hidden behind the scenes and handled automatically for you — all the while retaining the complete ability for you to step in and customise the process should you feel the need.

This is power and extensibility wrapped up in a way that simplifies and speeds up your development process like you have never imagined before.

Quasar has gone through its growing pains already

Early versions required many changes — often breaking changes — which I’m sure annoyed many of our early adopters, but they were necessary growing pains as we iteratively developed this extensive system.

Versions 0.13, 0.14, 0.15, 0.16 up to 0.17 were used to refine the framework, and by version 0.17 there was finally a suitable structure that could form a stable foundation that could grow and expand without the need for future breaking changes.

So, we took the decision to freeze development and undertake a complete refactoring to organise and optimise what we had created.

Notice, I say “we” … because, by this time, I had realised what a massive undertaking this was becoming … and understood it could never be achieved single-handedly, so I began recruiting a core team to collaboratively manage the development.

First one developer joined … then a second … and a third … until we’ve reached our current level of eight members in the core development team. Each a seasoned, experienced developer with skillsets complementing those of the others.

They’re backed up by a further level of additional volunteer staff members who handle customer support, documentation, media, and more …

And there’s also an active community of friendly developers … all willing to share and contribute their knowledge and advice to help everyone grow and develop together.

I like to think of this as *our extended family — *all gathered around a common goal of helping each other and pushing each other to new exciting levels of achievement.

Our Discord chat server in particular is a vibrant active community that never seems to sleep … there’s always ongoing conversations about a massive range of topics … and helpful advice being willingly exchanged by excited developers.

Version 1 has been a massive development … a major investment of time and effort by the team and all of the amazing open source contributors.

Since our decision to freeze development of the Version 0.* branch … over 4000 development hours have been invested in the production and rewriting of Quasar.

Also, our hyper-engaged user community have been actively involved in perfecting the code throughout our 5-month open beta and release candidate process … so that we could publish a** battle-tested version **…

This release has been designed with flexibility and extensibility in mind … but we already have a significant roadmap in place for where Quasar goes from here, which includes several major new build targets like Browser Extensions, Webview and Capacitor.

then this latest Quasar release is one you simply cannot ignore.